Sarah Benson has over a million combined reads on her stories on Wattpad. They are read in over 150 countries and have hit Top 5 on the Adventure, Fantasy and Paranormal hotlists, including #1 in Adventure for three consecutive days. Her YA story Born of Shadow was selected by ABC’s hit TV show Once Upon a Time for Best Heroes & Villains and has been indie published.

Sarah has been honored to speak at several events, including the “Anything You Wanna Be” encounter and the LDS Storymakers Conference (on how to build an online platform) with international bestselling authors like Brandon Sanderson and James Dashner. She is a founding member of the Wattpadres, a close-knit group of authors on Wattpad that with #1 rankings in nine categories, over 133,000 followers and a combined 66 million reads. She helps run regular competitions and cohosts weekly Twitter chats on Tuesday nights at 8 pm EST (come join us and be sure to tag your tweets #Wattpadres).

In a previous life, Sarah worked as a journalist and graphic designer. She holds degrees from BYU-Idaho and is attending the University of Idaho to earn a psychology degree. Sarah lives in in the beautiful mountains near Coeur d’Alene, Idaho with her family. She loves interacting with her readers.

10 Little Known Facts About The Author 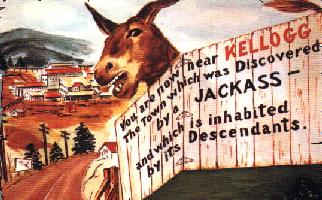 1. I’ve lived in a town discovered by a jackass–no joke! The legend goes a prospector by the name of Noah Kellogg made camp, and during the night while he was asleep, his donkey wandered off. In the morning, the jackass was standing on something which turned out to be a large outcropping of galena (lead ore). That was the discovery of the great Bunker Hill and Sullivan mines. As you can see in the picture above, the town is proud of that heritage! 🙂
2. I wrote my first story in the 2nd grade about a girl painting another girl’s hair green.
3. I climbed Chichen Itza when I was 5 months pregnant.
4. When I was in high school, I won 2nd place in State with a speech that included rabid washing machines. Don’t ask.
5. I dislocated my shoulder before the first day of college. Doing the bunny hop. Let me back up. I was at an outdoor dance. I was doing my thing and lo and behold a tire got in the way. I tripped over said tire and that was that. Yes, it was truly humiliating, and since no one believed me anyway, I would say things like You should have seen the other guy’s face. If I had to admit it happened at a dance, I’d just say mosh pit. And yes, when you’re in college on a journalism scholarship, it’s really difficult to type while wearing a sling!
6. As a graphic designer, I have created everything from marketing materials for Fortune 500 companies to cosmetic designs for Nicole Miller to buffalo jerky packaging. Freelancing made for an eclectic and incredibly interesting career.

7. I won two Young Author’s contests as a child. In 4th grade, my story about a family that solves mysteries together won a gold medal, and the following year I won a silver with a story about a girl whose father is an alcoholic and her worries about her parents splitting up.

8. I wake up at 4:30-5:00 every morning to get an hour or two of writing in before the day starts. I’m always trying to squeeze in more time for writing.

9. One of my kids has dyslexia. I have been fascinated to learn so much about the unique approach on life these kids have.

10. I once self-published a digital scrapbooking ebook called “Secrets of the Designers.”